Finally I had time to finish writing my memories about the EO. I have already posted a video about our runs, but now let’s have a look what exactly happened there. 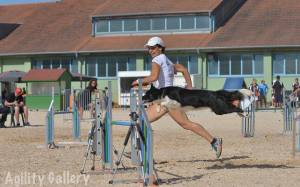 EO 2015 is over. So many people asked me how I felt , what it was like. And well,yes I could not tell them that I am completely satisfied. Simply because in the Final the stress and the pressure ate me practically alive, and because I could not run far as good as we anyway can. And this makes me feel to be a bit pissed off 😉

Ok, but let’s start from the beginning, let’s talk about the good things. Because there were many of them.

The venue was amazing, it was a place where you think it is appropriate to organize the biggest agility event of the year – biggest, regarding the number of the competitors. No wonder why, the place was built to hold riding shows and competitions and every corner of the place serves this purpose. Beautifully maintained courses, indoor arenas – not one but two big and a small hall, great areas to have rest, warm up, eat, sit , spectate, support. Though, the available services unfortunately didn’t reflect the high quality of the venue. The hotel reception and the restaurants belonged to the accommodation were just unbelievably unfriendly and very-very-VERY slow when we sat down to eat a dinner. Normally I don’t complain about poor services but this was so surprisingly bad , it made me feel we are somewhere… I don’t know… somewhere else but not in the middle of Europe, in Germany. It was really weird.

The competition went well. We run clean in the team runs, and in the individual agility. On Friday with the cleans we came to such a bad places (36th and 70th) that I was kind of shocked. Ok, we didn’t really run fast (needless to say 🙂 ) I wanted to make it clean for sure to collect some point to the team results. We can say that mission was completed from this aspect, from our team Jet and me collected the most points. Still, the overall result was not good enough to get into the team Finale.

But I was really crazy for this poor result, and I knew that if we want to run in the individual Finale we MUST RUN FAST, not matter what. With this in my mind we stood at the start-line of the agility course on Saturday. It was a nice, kind course with combinations we practiced thousand times in training. Until the very last part of the course everything was super but at one point I couldn’t start sprinting in time, in the sand I felt that my foot stacked in a hole. It felt endless by the time I could speed up in order to catch up with Jet and reach the next crucial point on the course, where I had to direct Jet through the last obstacle combination. Somehow I made connection with Jet who just ran forward like a rocket, and managed to guide her through the last jumps. But when we reached that end part of the course I felt so exhausted that I nearly forgot where the course went and it was a hard work not to lead Jet off course. We run clean at the end, but I felt we lost a lot of time on that last part, and I didn’t really hope for good result.

In the afternoon we run the jumping. That was probably the most unlucky run for us so far. It was again, a not too difficult but nice course and we had a very good teamwork and speed on it. It was great until a point at about the three-quarter of the course when I slipped in the sand I ran into a jump obstacle. According to the agility regulation the handler is not allowed to touch the obstacles so as I did this I was disqualified from the run. Apart from my fall I think this was our nicest run. As I watch it on video a good friend of mine comes to my mind who said ones, that Jet moves with me on the course like a silk string that gently and effortlessly slides through the course. Normally I don’t really like to watch ourselves running, but somehow I find this run very nice and harmonious. What if I don’t slip… But…

So I was kind of hopelessly sad after the jumping run because I was pretty sure that the agility was not good enough to get into the best 25 teams who goes to the Finale. Yes I was sad because I don’t go to the EO to run nice, I go there to bring the most out of us, and I felt that we tried, tried hard and failed. My aim, my dream was to be good enough to get into those best 25th and I knew we can do it. I had this unlucky slip in the jumping, and I thought that because of the slow last part, the agility will be not good enough even though we ran the biggest part of the course with the best speed in our lives. And yes I was really sad about that.

I went away to walk to cool Jet down and when I returned, my team-mates told me that after 100 dogs I am at the 4th place in the result list. I was a bit surprised but after 2 sec I said ok, 300 other team is following no way that I will stay in the best 25. My husband Daniel and I sat next to the agility course and watched about the last 100 dogs running. They came, came one after the other and a few had better time, but nearly none of them had clean run. Maybe 2 or three. The round was over and after about an hour of waiting I didn’t believe what I saw on the result list. Lightspeed Jetie finished on the 8th place. Wooooowwwwww 😀 and then, hurrrraaaayyyyy…. yippiieeee 😀 And yesss, we go into the Finale wohoooo :-D. Moreover a my team-mate Eszter has also qualified from the 16th place with her BC Vie. And that was an extra added happiness.

The next hours didn’t really support any success for Sunday. At dinner I ordered a „Wiener Snitzel” what arrived 1,5 later was half raw meat inside, disgusting soft breadcrumb coat outside with half-hard fully salted uneatable rice. I am not fussy with food at all, but the only reason I didn’t start a big argument over this meal was my good mood due to the 8th place. Instead of complaining I left nearly the whole meal there, missing to fill my stomach with nutritious food that gives energy for the coming day. In the morning,after 7 hours of sleeping at 6 am I woke up hearing the flies buzzing around. They were really annoying and I could not fall asleep again though I had a lot of time till our Finale round.

So nor physically nor mentally I was not ready to run my best. I went to the competition quite early, I watched the Finals and I felt no good at all. A nice person came to me feeling that I needed a bit of support and made a joke with a cheeky light in his eyes saying ‘hey, it is a same trial as any other one’. Haha. Yes, that’s exactly what I tried hard to make myself believe. I had no success in that. 🙂

So after a good warm up, like a frightened little bunny I went to the start point and I run a ‘D’ on a course what we can make clean in any other circumstances. That’s the beauty of EO. It is NOT a competition like any other. That’s the EO.

Jet was absolutely amazing. She competed in an amazing shape. Since a while I give the FitDog supplement for her and I am very happy whit that as it seems to make its work, it helps to maintain the energy level of Jet during a long competitions like the EO was, and also to recharge her after each day.   Since the EO I have told this many times, and I still amazed always when I think that she made no mistake in 3 days and 5 runs. She was just perfect. In the individual jumping I was a little unlucky, in the Finale… welll… what I have said… nerves. My nerves. But she was fast, happy, and focused. Ahh, wish I could do it better.

So it was a beautiful experience, I was overall very happy to be able to compete in this year’s EO. World Championship is just at the corner so we don’t have much time to be thinking over and over the EO. I look ahead, many thing must be done in the next weeks.

View all posts by JuliaFuzi